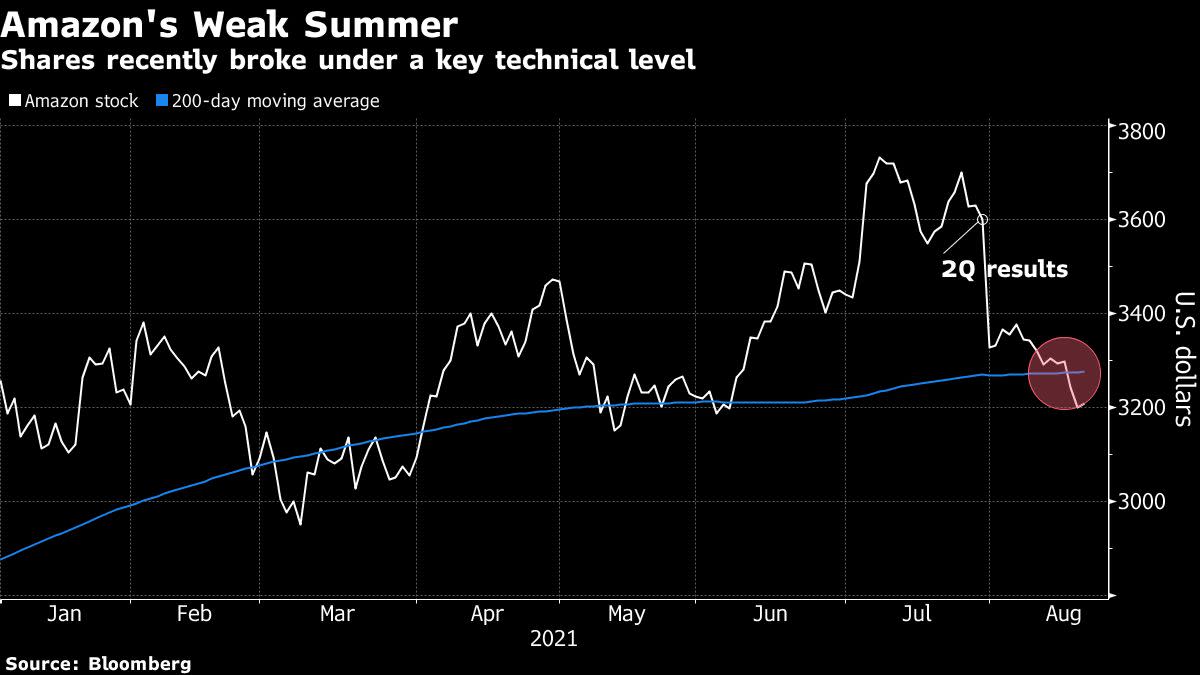 
(Bloomberg) — It’s rare to see just about everyone on Wall Street agree on something, but that’s the case when it comes to Amazon.com Inc.

Every single analyst who rates the stock — all 55 of them — recommends clients buy it, according to Bloomberg data. Active fund managers “are even more overweight” the name now than they were a year ago, per a Bank of America report on Aug. 10.

Yet that ubiquitous bullishness is being put to the test as last month’s unexpectedly weak sales forecast complicates the company’s growth narrative. In a summer when Amazon co-founder Jeff Bezos blasted off into space, the company’s stock has fallen back to Earth. The shares have tumbled nearly 14% from a peak in early July, erasing about $253 billion in value, as investors question its prospects on the other side of a pandemic that turbocharged demand for its services.

Shares edged 0.8% higher on Thursday. Earlier this week, the stock closed below its 200-day moving average for the first time since June, and it is now lower than where it started the year.

“The market rewards growth and it doesn’t look like Amazon has any catalysts for increased spending of its users or picking up more users,” Kim Forrest, founder and chief investment officer of Bokeh Capital Advisors, said in an interview on Bloomberg Television.

The company’s reported plan to open several large department-store-like locations in the U.S. doesn’t appear to be the news that will turn the stock around. The Wall Street Journal’s report was based on unnamed people familiar with the matter.

Amazon’s poor performance stands out among U.S. companies valued at more than $1 trillion, as well as the market as a whole. Apple Inc., Microsoft Corp., and Alphabet Inc. all hit records this week, as did the S&P 500 Index. Facebook Inc. is about 5% below its own record close.

The e-commerce company’s disappointing outlook last month came along with revenue that missed estimates for the first quarter since 2018. Analysts have pared back their expectations in the wake of the report. For Amazon’s current quarter, the average earnings estimates has dropped about 16.5% over the past month, according to data compiled by Bloomberg. The revenue consensus has fallen by nearly $6.5 billion, or 5.5%, over the same period.

Yet the shares do not yet look technically oversold, said Chris Verrone, partner and head of technical and macro research at Strategas Research Partners, who thinks more caution is warranted. And the unanimous bullishness toward the stock is itself also a red flag for him.

“This is the time to be a contrarian,” he said in a phone interview. “When every analyst is optimistic it is tough to live up to those expectations. I think we’ll see downside until analysts capitulate and start downgrading.”

Of course, the positive consensus on Amazon means that many view the weakness as a buying opportunity. Even as growth decelerates from pandemic-era levels, analysts see long-term tailwinds for its online retail and cloud computing divisions, along with an increasingly dominant advertising business.

The average analyst price target implies gains of about 30%, by far the highest expected upside among mega-caps.

The stock’s current level “represents an opportunity for sure,” said Dan Forman, managing director and global technology sector specialist at MKM Partners. He added that the stock had priced in the growth concerns, and that year-over-year comparisons would get easier after the fourth quarter.

“The stock is trading at a discount to its one-, two-, and five-year averages” on the basis of enterprise value compared with earnings before interest, taxes, depreciation and amortization, he said. “That, to me, is very relevant. I think there’s a high probability of stability at these levels.”

Clever Places to Sell Used Books Online and In Person

Stock Market Selloffs Need a Trigger. Here’s What Could Cause the Next One.

Why Suze Orman’s favorite investing method might cost you money

Your credit score may soon depend on your web history

© Reuters. A visitor and moon-shaped light are reflected on a window at Sunshine City’s Observatory after COVID-19 controls were…