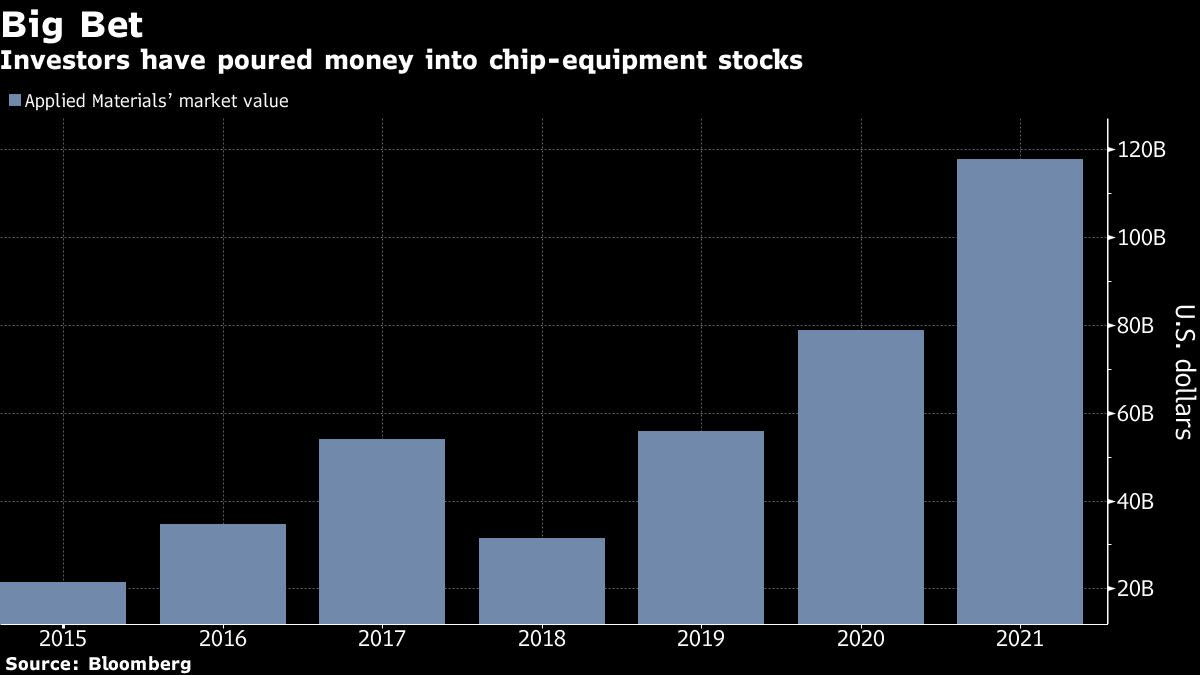 
(Bloomberg) — Applied Materials Inc., the biggest maker of machinery used to manufacture semiconductors, topped earnings estimates and gave a rosy forecast in the latest sign that the chip boom is going strong.

Revenue will be roughly $6.3 billion in the three-month period ending in October, the Santa Clara, California-based company said Thursday. Analysts have estimated $6.04 billion on average, according to data compiled by Bloomberg. Profit will be $1.87 to $2.01 a share in the fiscal fourth quarter, excluding some items, compared with an average estimate of $1.81.

Chipmakers have filled Applied Materials’ order books as they rush to add production capacity. A surge in demand for semiconductors has led to unprecedented shortages of the vital electronic components, forcing the industry to play catch-up.

The expansion is set to continue as the economy shifts to a greater reliance on automation and computing, Chief Executive Officer Gary Dickerson said in an interview. While not every quarter will deliver a spike in revenue, the company is confidence that long-term growth will continue.

“We’re in the biggest inflection of our lifetimes,” he said. “We see strength through the end of the year and into next year.”

Some investors are concerned that previous patterns will return. In the past, spikes in equipment demand have been followed by painful contractions. Applied Materials’ revenue shrank 15% in 2019. Dickerson said the market for semiconductors has expanded into so many new areas that “the industry’s future will not be like the past.”

Applied Materials’ customers include Samsung Electronics Co., Taiwan Semiconductor Manufacturing Co. and Intel Corp., making its projections a window into the spending plans and confidence levels of some of the biggest companies in technology.

The shares were little changed in extended trading after closing at $129.20 in New York. They stock has gained 50% this year.

Two years of slowing investment — and extra caution during the pandemic’s peak last year — mean that many semiconductor makers can’t keep up with orders, particularly for car components. It takes months to build and install equipment made by Applied Materials and other chip-equipment producers. Machines being built now won’t add to output until 2022. Earnings climbed to $1.90 a share in the third quarter, excluding some items. That topped an average analyst estimate of $1.77. Sales rose 41% to a record $6.2 billion, compared with an estimate of $5.94 billion.

The company has said it sees the total market for chip factory equipment growing to the high $70 billion range this year. That will expand again in 2022 to bring the two-year total to more than $160 billion, Applied Materials has projected.

(Updates with comments from CEO beginning in the fourth paragraph.)

Charles Schwab to give most employees 5% raise, pushes back return to office

VZ Stock: Is It A Buy Or Sell? Here’s What Earnings, Chart Show On Verizon Stock

Goldman Sachs Reduce Chevron Inventory. Right here Are the Oil Shares to Purchase As a substitute.

Oil Prices Aren’t Slowing Down. Play the Rebound With These Stocks