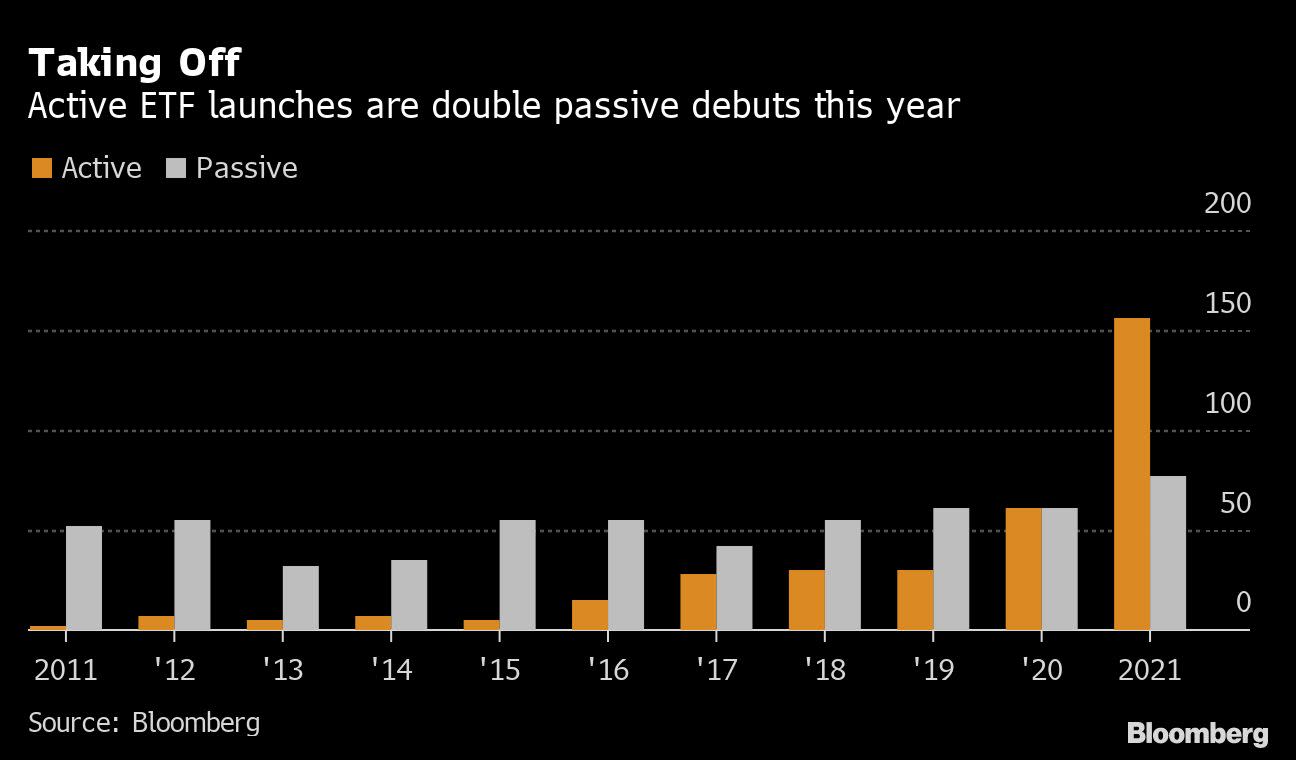 Amped up by a meme-crazed market and emboldened by the success of Cathie Wood’s Ark Investment Management, stock pickers are storming the $6.6 trillion U.S. exchange-traded fund universe like never before — adding a new twist in the 50-year invasion from passive investing.

Passive funds still dominate the industry, but actively managed products have cut into that lead, scooping up three-times their share of the unprecedented $500 billion plowed into ETFs in 2021, according to data compiled by Bloomberg. New active funds are arriving at double the rate of passive rivals, and the cohort has boosted its market share by a third in a year.

“Historically, people have thought about ETFs as being indexed-based,” said Todd Rosenbluth, head of ETF and mutual fund research at CFRA Research. “Then Ark became a household name, and then investors came to realize that not only were those products worth looking at, but so were others.”

None of this is supposed to happen in an industry built on the magic of indexing. Yet a market roller coaster brought on by the pandemic is helping discretionary asset managers turn ETFs to their own advantage.

Equity conditions in general have become conducive to an active approach, leadership shifting in a stop-start economy, an unpredictable macro backdrop, and increased market breadth.

Read more: Active Funds Crushed Equity Benchmarks in May Like Never Before

At the same time, investors are showing an unusual willingness to make concentrated bets, from riding the meme-stock madness to following the kind of thematic vision laid out by Wood.

They’ve poured $62 billion into active ETFs year-to-date. That’s 12% of total flows going to a slice of the market with only 4% of assets. In the rush to tap the burgeoning demand, issuers have now launched 156 actively managed products in 2021, compared with 77 passive funds.

“At the end of day, the ETF is just a wrapper, it’s just a way to package and distribute an investment strategy,” said Ben Johnson, director of global ETF research at Morningstar. “More investors are getting hip to the fact that the notion of an actively-managed ETF is not an oxymoron.”

The active surge is the latest development in a money-management battle that’s been raging since July 1971, when a team at Wells Fargo & Co. created the original index fund.

Today, the passive juggernaut is slashing industry costs, opening up investing to the masses and forcing discretionary traders to adapt or die. Active launches may be booming, but the bulk of cash flooding U.S. stocks is still destined for big, cheap funds that do nothing but track the market.

“Active ETFs are doing better than they have in past, but passive is still king,” said James Seyffart, an ETF analyst for Bloomberg Intelligence. “A lot of that active flow in the big months from late 2020 to early 2021 is to Cathie’s funds.”

Wood has become the poster child for active management in ETFs. The flagship fund at Ark was one of the best-performing in America last year with a 149% return.

Inspired by this and her enticing thematic approach — which focuses on trends like robotics or space travel rather than market segments — investors have sunk $14.5 billion into Ark funds in 2021.

The mini boom for active ETFs comes not a moment too soon for the stock-picking industry.

Passive funds — mutual and exchange-traded — now manage $11 trillion and are on course to hold 50% of all registered U.S. fund assets within five years, according to BI calculations.

Critics say the rapidly swelling index industry is blowing bubbles in stock markets, weakening corporate governance and more. And in some ways, it can also hit returns.

Take Tesla Inc.’s entry into the S&P 500 in December. While discretionary managers could buy Elon Musk’s firm in advance, index funds ended up adding it at an inflated valuation — and were forced to offload billions of dollars in other stocks to make space in portfolios.

“Index funds systematically buy high and sell low,” wrote Rob Arnott of Research Affiliates and his colleagues in a June paper. They argued investors would have been better off holding the company pushed out of the index to make way for Tesla.

The main advantage stock pickers enjoy over their passive peers is more flexibility in deploying their cash. That’s something they’ve been able to bring to ETFs for years — Wood’s first fund launched in 2014 — but it was a rule change in 2019 that paved the way for the current jump in activity.

It made launching ETFs easier, and enabled new structures that could hide the strategy underpinning a fund. That helped lure multiple major Wall Street players to the industry after years of holding out, including the likes of Wells Fargo and T. Rowe Price.

Talk of discretionary management’s decline is still rampant, but the woes aren’t as bad as they may seem. Even as U.S. active funds — mutual and ETF — saw $209 billion exit last year, they closed 2020 with about $13.3 trillion under management. That was a 13% gain from 2019.

The increase was largely thanks to rising markets, but if the current trend continues, before long it could just as easily be down to ETF growth.

“We’re going to see the percentage of assets in actively-managed ETFs continue to climb higher,” said Rosenbluth at CFRA. “They’re going to continue to have the opportunity to punch above their weight.”

Stocks set to benefit from a hybrid work future

What to know about tax law changes

More surprise tax refunds will go out by New Year’s, the IRS says — can you expect one?

EVs Will Rule the World By 2040. Tesla Stock Isn’t the Only Winner.

A Ford F-150 pickup truck is offered for sale at a dealership on September 6, 2018 in Chicago, Illinois. Scott…