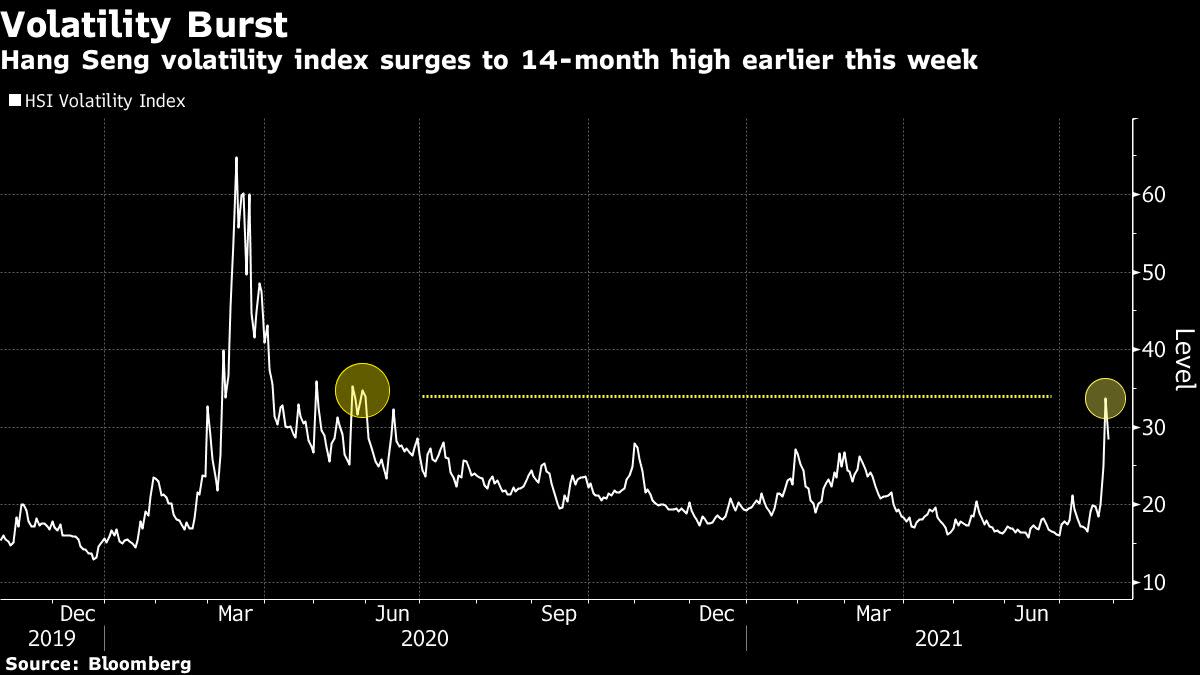 
(Bloomberg) — Chinese stocks fell on Friday, rounding off a volatile week for investors struggling to price in Beijing’s tightening regulatory grip after a rout pushed the nation’s key equity index to the brink of a bear market.

Investors are grappling with an uncertain regulatory landscape, given the range of industries targeted by the government. From derailing Ant Group’s blockbuster IPO at the eleventh hour to rules curbing monopolistic practices across the internet landscape, reducing leverage in the property industry and reforming the tutoring sector, the investor playbook continues to rapidly change.

“It’s the fear of the unknown,” said Justin Tang, head of Asia research at United First Partners. “Market sentiment is on thin ice. Investors probably expected more meat, however they only got bones in respect to details of the Chinese government’s exhortation to calm down.”

This week’s steep stock market declines were triggered by China’s move to ban swathes of its booming tutoring industry from making profits. It was the government’s most extreme step yet to rein in companies it blames for exacerbating inequality, increasing financial risk and challenging the Communist Party’s grip on key segments of the economy.

The ensuing rout was ferocious enough for Beijing to signal its discomfort. State-run media published a series of articles suggesting the selloff was overdone, while the nation’s securities regulator convened a video conference with banking executives Wednesday night to convey the message that education policies were not intended to hurt companies in other industries.

The People’s Bank of China pumped a larger than usual amount of cash into the financial system for a second-straight day. The central bank injected 30 billion yuan ($4.6 billion) of short-term liquidity, after adding the same amount in the previous session. The move was made to soothe market nerves and ensure ample cash supply towards the end of the month, analysts say.

China’s CSI 300 Index is set to close about 8% lower for the month, which would be its worst performance since October 2018. The Hang Seng Index is down by around 11% for the period.

Renewables and semiconductor shares have been bright spots amid the rout, with the top 10 performers on the CSI 300 this week all related to the themes. Industry component maker Sungrow Power Supply Co. and Semiconductor Manufacturing International Corp. gained at least 25%, as the companies are seen to benefit from China’s structural shift towards greater innovation. The Star 50 Index, which counts such companies as members, is up 2.2% in the past five days and headed for the highest in nearly three weeks.

Meanwhile, the Hang Seng Tech Index fell by as much as 4.5%. Friday’s slide followed a decline by U.S.-listed Chinese stocks Thursday, as investors looked past gains by Didi Global Inc., amid reports the ride-hailing company was considering going private.

UPS Earnings Weren’t Purported to Be This Good. Why the Inventory Is Hovering.