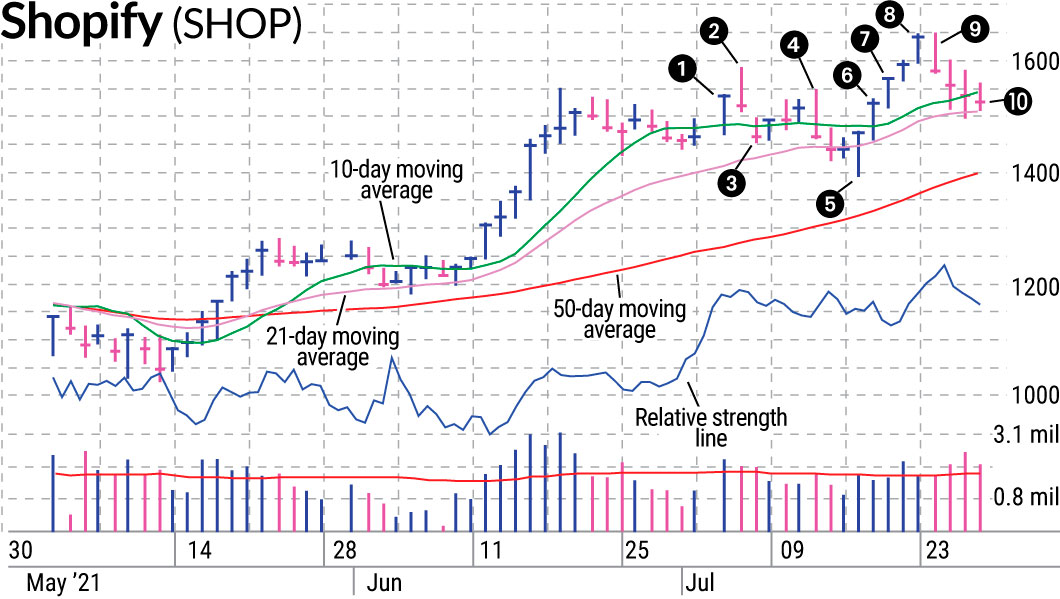 
You can go quite a while where swing trading setups just don’t seem to materialize. But when they do, you have to be ready. Shopify stock was among the winners that led to a strong second half of July. It all started with a reversal in the stock market on July 19. The ripple effect upon individual stocks led to a higher batting average with bigger gains to end the month.

Shopify (SHOP) is no stranger to SwingTrader. In early July, we saw what looked like nice sideways action in Shopify stock just before a strong move higher (1). Though it wasn’t much of a pullback, the break above the slight downtrend was actionable and it joined SwingTrader on that day. We quickly saw a 5% profit and took a third of the position off to lock in some profit before the stock reversed lower (2).

That quick profit taking allowed us to exit the trade unscathed when SHOP stock immediately undercut the low of our entry day (3). Though Shopify stock recovered, it didn’t get very far before showing another downside reversal on an outside day (4).

The next few days saw Shopify stock weaken and fall below its 21-day moving average line (5). Notably, the bottom day was also an outside day but this time with a positive reversal. We saw a lot of upside reversals in individual stocks that day. Though volume was weak in many of the stocks for most of the day, volume came in strong near the close (watch the video for our analysis on that day).

Shopify stock followed up on its reversal the next day (6) and was added to SwingTrader. Our exposure went from 13% the morning of July 19 to 87% at the close of July 20 because of the sheer number of setups.

But we still followed our swing trading rules. We took profits into strength on Shopify stock after a 4% gain (7) and an 8% gain (8).

Want a longer-term perspective on Shopify stock? See what this O’Neil portfolio manager has to say on the Investing With IBD podcast.

At that point, the market looked extended again, as did many of our holdings.

Beyond that, we didn’t give Shopify stock much room. We exited the final position on another outside day that looked to ready close near the lows of the trading session (9). We had a nice quick gain and earnings were right around the corner. Even though there wasn’t a big move after the earnings report (10), we were still better off with our earlier sell. We also missed the extra risk as earnings season nailed a number of premier stocks like Amazon (AMZN), which fell more than 7% on Friday.

More details on past trades are accessible to subscribers and trialists to SwingTrader. Free trials are available. Follow Nielsen on Twitter at @IBD_JNielsen.

Is Too Much Knowledge Sometimes A Bad Thing?

Alibaba stock has taken a hit from China crackdown, but its earnings could be a different story

ARK snaps up $246 million price of Coinbase in market debut

Up to three-quarters of the $800 billion PPP flowed to business owners instead of workers, study finds