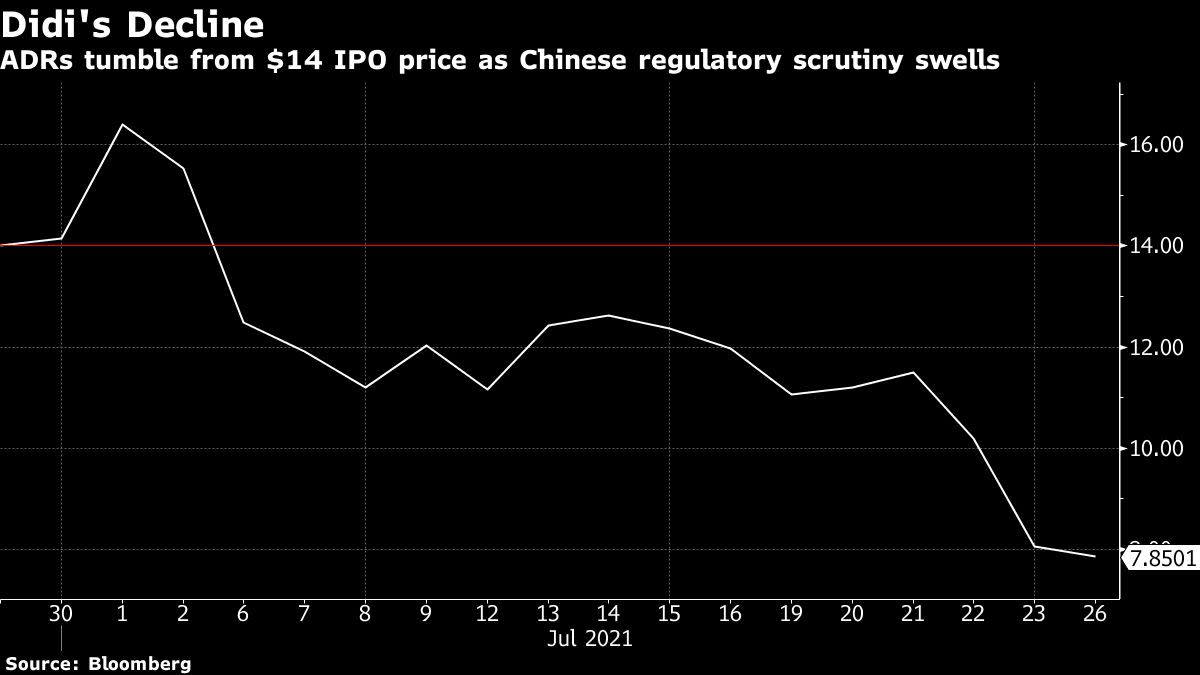 A 25-day quiet period expired on Monday for U.S. analysts at the banks that took Didi public on June 30. The milestone that typically prompts a wave of new, bullish research instead left traders wondering where to turn for more insight around the impact of China’s broadening regulatory crackdown that began with the ride-hailing giant.

A first look at consensus earnings estimates could have cooled volatility by helping traders settle on financial expectations for the quarter, even if further developments in China’s crackdown could play a larger role than any analyst note. Didi’s shares closed on Monday 43% below their IPO price after another volatile session. They slumped 30% on the final two trading days of last week and fluctuated in volatile trading on Monday.

Goldman Sachs Group Inc., JPMorgan Chase & Co. and Morgan Stanley led a group of 20 banks handling the offering last month. Spokespeople for each of the three banks declined to comment. Some other underwriters include Barclays Plc, Bank of America Corp. and Citigroup Inc.

Among analysts who weren’t bound by a quiet period — because their bank wasn’t involved in the IPO or because they’re based overseas — Didi has two buys, one hold and no sells. The buy-rated analysts haven’t updated their targets during the stock’s plunge this month. The one neutral rating, Atlantic analyst Xiao Ai, arrived in a downgrade on Monday.

“While we believe the most likely outcome will be manageable financial and operational penalties, the range of outcomes leaves us unable to recommend the stock until there is more certainty,” Atlantic’s note said.

When it comes to U.S. listings of Chinese firms, the silence on Wall Street extends beyond Didi. Full Truck Alliance Co., for example, has yet to get any initiations since its analyst quiet period expired on July 19. The truck-hailing platform was swept into the Chinese government’s cybersecurity probe on July 4.

The reticence around Didi and Full Truck contrasts with other recent IPOs. New coverage for Krispy Kreme Inc., for example, was published by at least 10 banks on Monday. Legalzoom.com Inc. got at least eight initiations on Monday as its 25-day quiet period expired.

“A loss of momentum across all North Asian equity sectors, with defensive and low-vol faring best, suggests risk-off sentiment is building and this may continue if the results season doesn’t provide a much-needed positive catalyst,” Bloomberg Intelligence analyst Marvin Chen wrote in a note.

(Updates the latest trading in Didi in the third paragraph. A previous update added that Morgan Stanley declined to comment.)

What to Know About Tax Rules for Cryptocurrencies

Amazon Inventory Runs Up In direction of Resistance: Technical Ranges To Watch

2/2 © Reuters. FILE PHOTO: The logo of Swiss bank Credit Suisse is seen at a branch office in Zurich,…