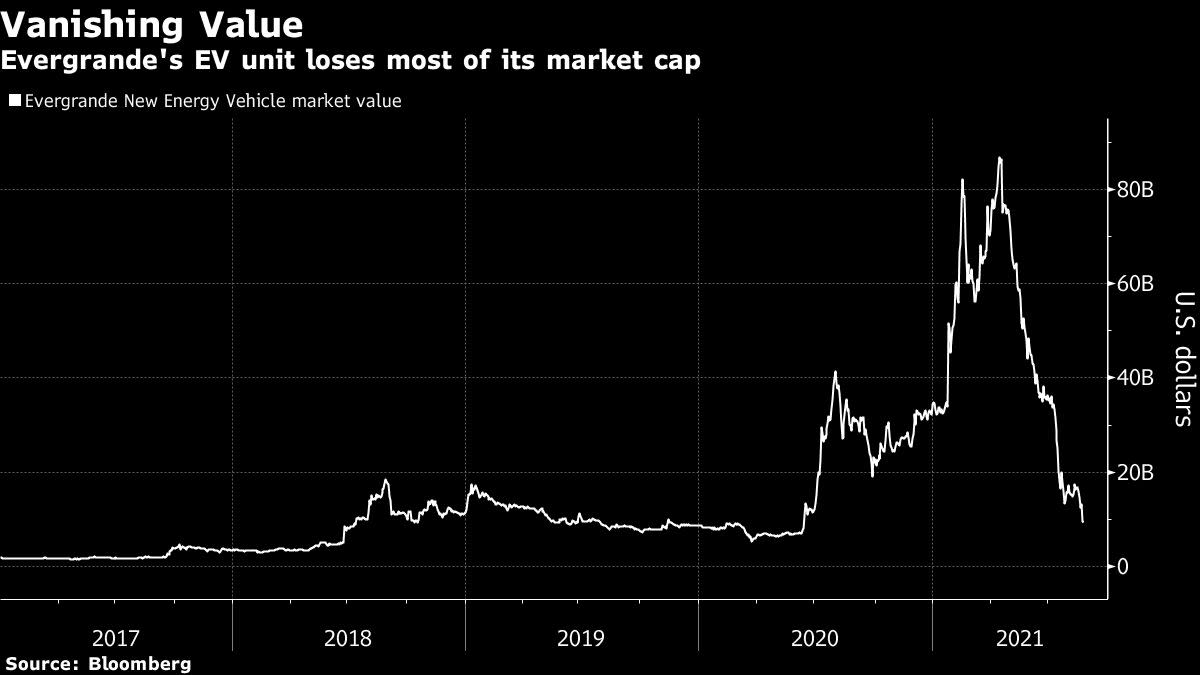 
(Bloomberg) — Shares of China Evergrande Group’s electric vehicle unit are collapsing in Hong Kong, wiping about $80 billion from what was the property developer’s most valuable listed asset.

China Evergrande New Energy Vehicle Group Ltd. sank as much as 22% Thursday after its parent said the unit lost 4.8 billion yuan ($740 million) in the first half. The EV business’s market value was about $87 billion at its April 16 peak, greater than that of Ford Motor Co. and almost four times the capitalization of China Evergrande itself at the time. Evergrande NEV shares are down 92% since, the worst performance in the Bloomberg World Index and lagging even China’s tutoring stocks.

Evergrande’s subsidiaries are being punished on concern the world’s most indebted developer will need to sell assets at a steep discount amid mounting pressure from Beijing. Shares of listed businesses — including the 65% stake it owns in Evergrande NEV — are the most liquid if Evergrande needs to generate cash quickly. Evergrande in May raised $1.4 billion from the unit in a heavily-discounted share sale.

The electric car upstart was already a capital-intensive project for Evergrande Chairman Hui Ka Yan, who funneled billions of yuan into the business in a bid to make it “the world’s largest and most powerful new energy vehicle group” by 2025. Previously known as Evergrande Health Industry Group Ltd. before a name change last year, the company still generates the majority of its revenue from its health business.

Speaking on an earnings call in late March after Evergrande NEV’s full-year loss for 2020 widened by 67%, Hui said the company planned to begin trial production of cars at the end of this year, delayed from an original timeline of last September.

Evergrande said earlier this month it was in talks with “several independent third-party investors” to sell stakes in the electric vehicle and property services subsidiaries. It’s selling a Hong Kong development project at a loss, people familiar with the matter said this week.

(Updates to add quote in fifth paragraph, background on the company in sixth and seventh, and update numbers throughout.)

Opinion: Cisco traders spooked by supply-chain issues, regardless of a return to development

Wendy’s will increase its dividend, share repurchase program and steering

Why Russia Is Refusing To Send Europe More Natural Gas