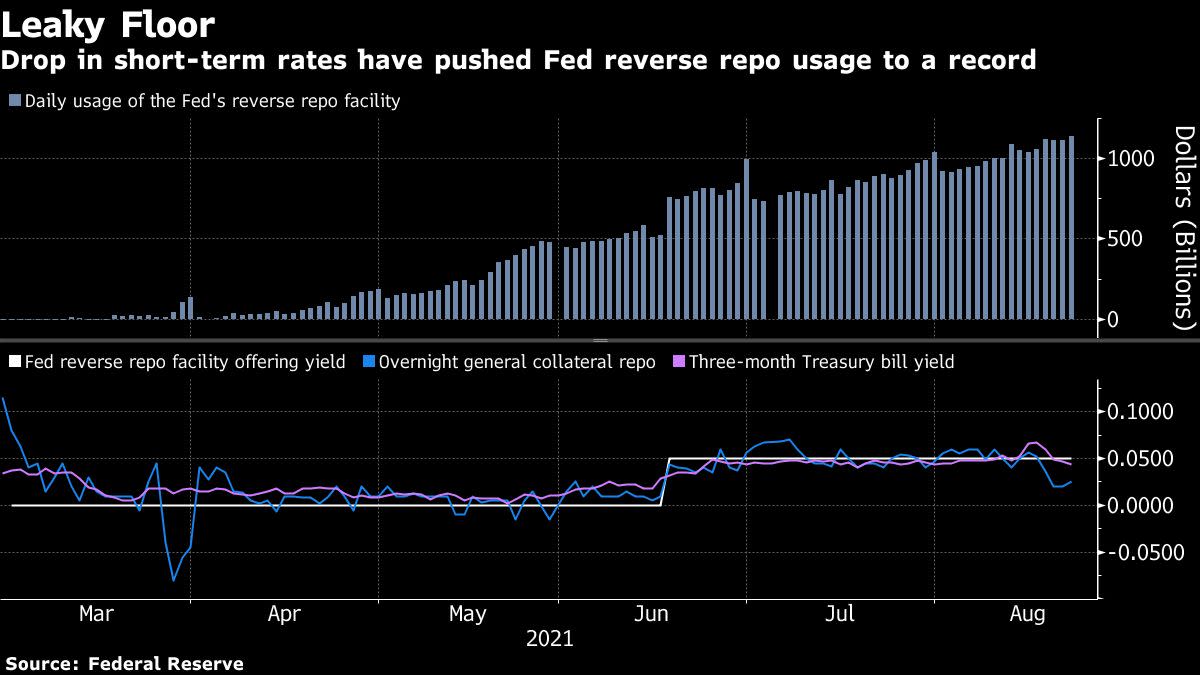 
(Bloomberg) — The Federal Reserve’s floor for overnight funding markets is proving to be no match for the deluge of cash.

Money-market securities ranging from Treasury bills to repurchase agreements continue to trade below 0.05% — the offering rate on the overnight reverse repo facility, which is supposed to act like a floor for the front end. The Fed at its June meeting had raised the rate by five basis points to help support the smooth functioning of short-term funding markets.

Demand for the so-called RRP facility has surged as a flood of dollars threatens to overwhelm funding markets. That’s in part a result of the central bank’s long-standing asset purchases and drawdowns of the Treasury’s cash account, which is pushing reserves into the system. As a result, liquidity has been swelling, especially as the Treasury cuts supply to create more borrowing room under the debt ceiling.

The pressure pushing down overnight rates toward zero is proving a major headache for money-market funds. It hampers their ability to invest profitably, and can lead to further disruptions as they begin to waive fees to avoid passing on negative rates to shareholders. A number of firms including Vanguard Group shut down prime money-market funds last year after struggling to cover operating costs in the low-interest-rate environment.

“The Fed’s technical adjustment earlier this year is not a panacea for the money markets,” JPMorgan Securities strategists Teresa Ho and Alex Roever wrote in a note. “Supply and demand technicals remain an overarching driver of rates, and with the supply and demand gap now having grown to $1.35 trillion, it’s not surprising that the Fed’s ON RRP is providing only a soft floor for money market rates.”

The strategists predict the distortion will linger even after the Fed begins reducing asset purchases from the current level of $120 billion per month. Even if the central bank were to complete tapering by August 2022, as JPMorgan expects, there may still be an additional $850 billion to $1 trillion of additional liquidity injected into the financial system.

While Treasury bill supply is expected to rebound once the debt-ceiling limit is resolved, it’s still unclear when that will happen. Bills maturing at the end of October and through November are yielding more than the securities surrounding those dates.

(Updates to add impact on money-market funds in fifth paragraph.)

Asian Stocks Up, Hopes Up Over Pfizer/BioNTech Vaccine’s Full Approval By Investing.com

‘I don’t think there’s a lot of upside from here,’ says stock-market legend, but U.S. stocks could rise in 2022 if earnings are good