Home > Finance > J.P. Morgan Says There’s Room for Over 40% Upside in These 2 Stocks 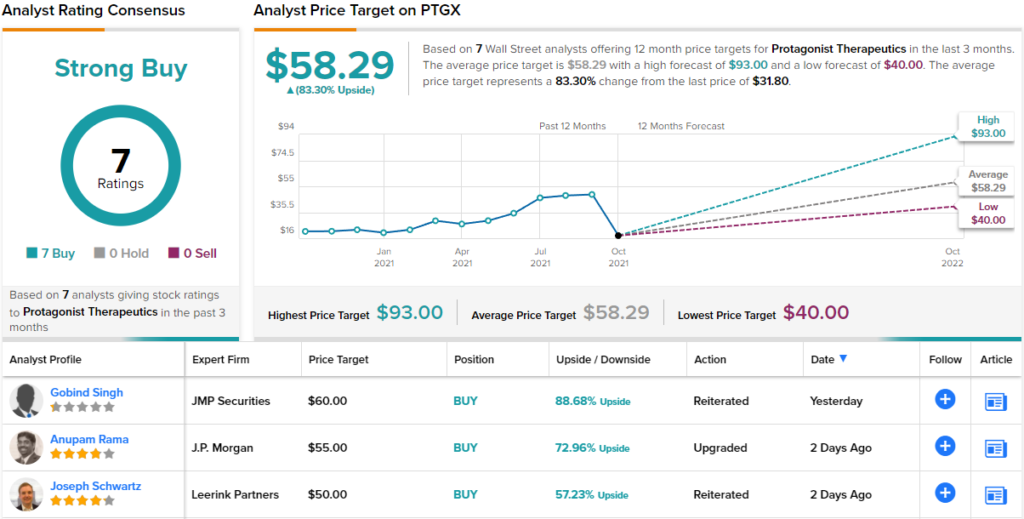 J.P. Morgan Says There’s Room for Over 40% Upside in These 2 Stocks


Stuck for fresh investing inspiration? You’re not alone. Plenty of uncertainty lingers on Wall Street as we head into 2022. Inflation is up, the job market remains stuck in an ugly combination of stubborn unemployment and record-high levels of job openings, all while Congress and the Biden Administration are looking less and less capable of passing a set of aggressive spending plans.

Writing from JPMorgan, global market strategist Marko Kolanovic acknowledges the headwinds but thinks there are powerful counter forces acting to support the market, and those will outweigh the negatives heading into next year.

“While the inflation force is likely to persist, we see stagflation as unlikely and note there are several powerful offsets to any potential drag on the consumer from higher energy prices. Historically, equity markets did well in periods of oil price increases, in particular those periods that followed a crisis,” Kolanovic noted.

JPM’s stock analysts are following their firm’s strategic lead, and looking for the stocks that are poised to make gains in the coming months. In particular, they’ve found two with over 40% upside potential, and are in the process of turning around right now. After using TipRanks’ database, we found out that each ticker has also received enough support from other Wall Street analysts to earn a “Strong Buy” consensus rating.

We’ll start with Protagonist Therapeutics. This clinical-stage biopharma company is developing new peptide-based medications through a proprietary platform. The new drug candidates created are specifically designed to act on key biological targets and chemical pathways. The company has, so far, developed five new compounds for its research pipeline.

Rusfertide is the more advanced of the two programs. The company has already reported positive Phase 2 data in Europe on the drug as a treatment for PV, and has been granted the FDA’s Breakthrough Therapy Designation for this indication. In September, the FDA placed a clinical hold on trials of rusfertide, but that hold was lifted this past week after the company released updated safety results. Protagonist reports that it remains ‘on track’ to initiate rusfertide’s Phase 3 study in the treatment of PV early next year. Meanwhile, preliminary data from the Phase 2 proof-of-concept study of rusfertide as a treatment for HH is ready for release, and will be published next month at a virtual conference hosted by the American Association for the Study of Liver Diseases.

Turning to the ulcerative colitis track, Protagonist is investigating PN-943. The drug candidate is currently undergoing a proof-of-concept study, a 150-patient Phase 2 trial that is expected to reach completion in 2Q22.

Covering Protagonist for JPMorgan, analyst Anupam Rama sees the recent Hold/No Hold as the key factor in the stock.

“The rapid resolution of the clinical hold in ~3 weeks comes as a surprise to us from a timeline perspective and the net effect does not appear material to us. Importantly, the update removes a key overhang on PTGX shares heading into important clinical readouts over the next ~12 months.… shares have not returned to pre-clinical hold levels, leaving upside on probability adjusted polycythemia vera indication alone (phase 3 trial will be initiated in 1Q22). Importantly, with the clinical hold now lifted, we expect more focus on near-term catalysts – phase 2 data for rusfertide in hereditary hemochromatosis (HH) at AASLD in November and phase 2 PN-943 ulcerative colitis data in 2Q22,” Rama opined.

In Rama’s view, PTGX deserves an upgrade, and he raised his rating from Neutral (i.e. Hold) to Overweight (i.e. Buy). His new price target of $55 implies an upside of 73% for the next 12 months. (To watch Rama’s track record, click here)

Overall, this biotech gets a unanimous Strong Buy rating from the analyst consensus, with 7 positive reviews set in the past week. The stock has an average price target of $58.29 and a trading price of $31.8, giving it a one-year upside potential of ~83%. (See PTGX stock analysis on TipRanks)

For the second stock, let’s shift gears and move from biotech to food tech. Oatly is a Swedish-based company that produces oat-based dairy product alternatives. The company offers a range of flavored milk substitutes, as well as non-dairy ice creams, yogurts, creams, and coffee drinks. The brand’s largest market is in Europe – mainly Sweden, Germany, and Britain – with its second largest market in China followed by the US. All US Oatly products are gluten-free, although this is not so in Europe and Asia.

Oatly is new to the public trading markets, having gone public through an IPO earlier this year. The event saw the OTLY ticker start trading on the NASDAQ on May 19, when the company sold over 84.3 million American depositary shares. The initial price of $17 per ADS was at the top of the pre-sale range, and Oatly raised $1.4 billion in the IPO.

This past summer, in August, Oatly released its first quarterly fiscal report as a publicly traded entity, for 2Q21. The company reported top line revenue of $146 million, up more than 53% from the year-ago quarter. According to management, the months of June and July this year saw the company’s highest ever consecutive monthly production totals. Looking forward, management expects that revenues for the full year 2021 will come in above $690 million.

Even with that, however, Oatly stock dropped sharply since it peaked in mid-June, losing almost half of its value. Yet, JPMorgan’s Ken Goldman sees the current low share price as a chance to buy in.

“With the stock -49% from its 6/11/21 peak (median food -7%), we now view the upside potential as far greater than the downside risk… On the positive side, we like (1) the growth of plant-based dairy in general, (2) the potential for oat milk to continue taking share from almond and other varieties, and (3) Oatly’s positioning and brand equity within the category. We model very strong top-line growth for the company for the foreseeable future,” the 5-star analyst wrote.

Joining the bulls, Goldman has upgraded his stance on OTLY from Neutral (i.e. Hold) to Overweight (i.e. Buy). His $21 indicates ~47% upside potential for the coming year. (To watch Goldman’s track record, click here)

With 10 reviews on record in the last three months, breaking down 8 to 2 in favor of Buy over Hold, Oatly gets a Strong Buy consensus rating. The average price target of $25.22 implies a 76% increase from the current share price of $14.33. (See OTLY stock analysis on TipRanks)

Tilray Stockholders Approve Increase In Number Of Shares To Help Drive $4B In Revenue, Stock Trades Down

If you’ve got extra cash, should you pay off your mortgage or invest?

David Tepper, billionaire investor and one of the world’s top hedge-fund managers, isn’t a fan of the stock market, right now….