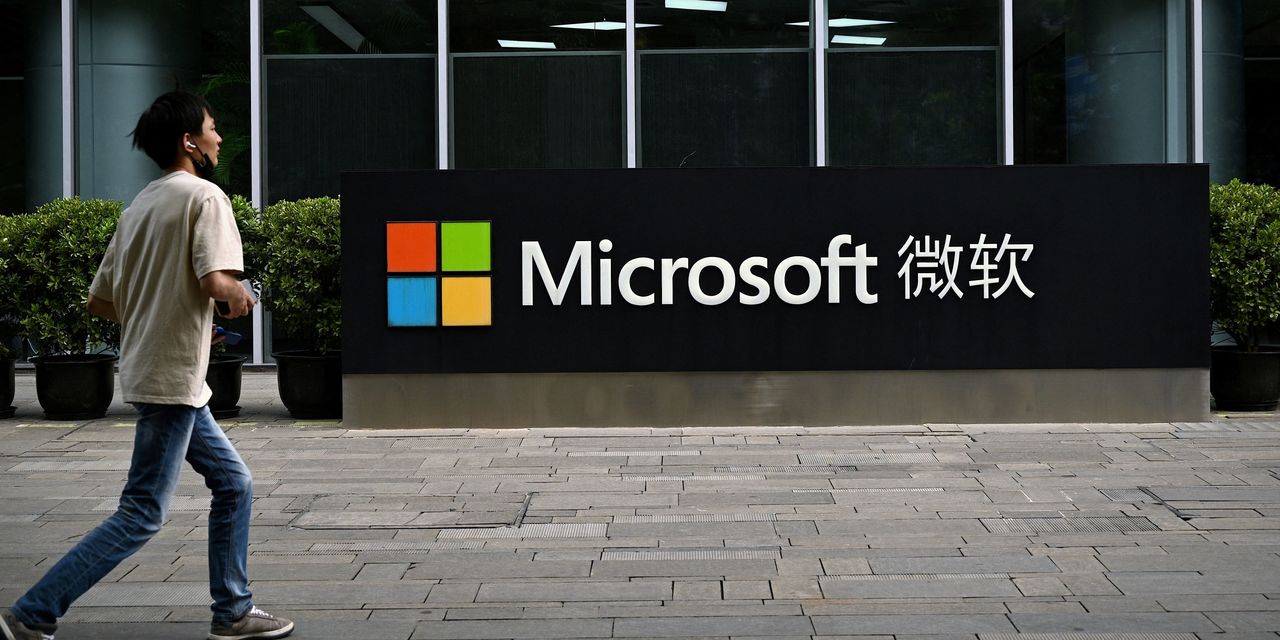 shares are trading higher late Tuesday after the software giant posted better-than-expected results for its latest quarter, and provided upbeat guidance for the September quarter.

On a call with analysts, Microsoft CFO Amy Hood said that the company sees “healthy double-digit revenue growth” for the June 2022 fiscal year.

Microsoft exceeded its own forecast in all three operating segments in its latest quarter.

Productivity and Business Processes, which includes Office, had revenue of $14.7 billion, up 25%, or 21% in constant currency, ahead of the guidance range of $13.8 billion to $14.05 billion. Constant currency removes fluctuations due to changes in local currency prices.

Revenue from the More Personal Computing segment, which includes Windows, Xbox, and Surface, was $14.1 billion, up 9%, or 6% in constant currency, which was above the forecast range of $13.6 billion to $14 billion.

Revenue from Azure, the company’s public cloud business, was up 51% from a year ago, or 45% in constant currency. (The company does not provide a dollar figure for Azure revenue.)

Meanwhile, revenue was up 46% at LinkedIn, with ad revenue on the platform eclipsing $1 billion for the first time. LinkedIn is now generating more than $10 billion in annual revenue. Xbox hardware was up 172% in the quarter, driving 11% overall revenue growth from gaming, with a 4% drop in Xbox content and services.

Revenue was up 53% for search advertising excluding traffic acquisition costs, up 20% for Office commercial products, and up 25% for Office 365. Server products and services were up 34%.

“Our results show that when we execute well and meet customers’ needs in differentiated ways in large and growing markets, we generate growth, as we’ve seen in our commercial cloud—and in new franchises we’ve built, including gaming, security, and LinkedIn, all of which surpassed $10 billion in annual revenue over the past three years,” Microsoft CEO Satya Nadella said in a statement.

The company repurchased $7.2 billion worth of stock in the quarter.

On the analyst call, Hood, the CFO, projected September quarter revenue that was well ahead of previous Street estimates.

For the Productivity and Business Processes segment, she sees revenue of between $14.5 billion and $14.75 billion, ahead of the old Street estimate of $14.1 billion. For Intelligent Cloud, she sees revenue ranging from $16.4 billion to $16.65 billion, well ahead of the Street at $15.7 billion. For More Personal Computing, Hood expects revenue to range from $12.4 billion to $12.8 billion, about in line with the Street at $12.7 billion.

At the top of the range for each category, revenue would be $44.2 billion, ahead of the Street consensus at $42.5 billion.

After initially trading lower after hours, Microsoft shares were up 0.2% in late trading.

Apple Earnings Might Blow Previous Expectations. What That Means for the Inventory.

Opinion: Why you won’t know it when a bear market starts