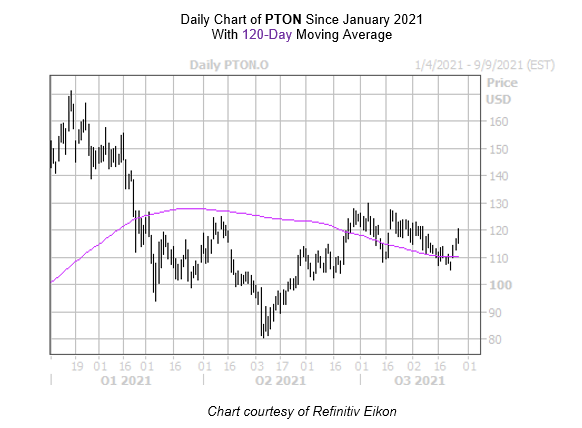 Options Traders Hop On Peloton Stock Ahead of Earnings


Fitness concern Peloton Interactive Inc (NASDAQ:PTON) has struggled on the charts of late, though the security has managed a nice recovery from its May 6, annual low of $80.48. PTON recently reclaimed support from the 120-day moving average, a trendline that put pressure on the shares for several months earlier this year. The equity is muted today, last seen down 0.4% at $115.80, and remains down 23.7% year-to-date. Meanwhile the company is slated to report fiscal fourth-quarter earnings after today’s close, an event that could send the stock spiraling if past is precedent.

Regarding Peloton stock’s past performances after earnings, the security has a tendency to move lower after the company reports. In fact, out of the last eight quarterly reports, the stock has moved higher just once, which occurred in May 2020 when PTON saw a next-day move of 16%. Over the last two years, the equity has averaged a next-day swing of 6.6%, regardless of direction, and this time around, the options pits are pricing in a much bigger move of 12.3%.

Options traders are coming in hot ahead of PTON’s earnings event. So far, 33,000 puts and 31,000 calls have crossed the tape — two times what’s typically seen at this point. The two most popular contracts are the weekly 8/27 105- and 95-strike puts, while positions are being opened at the latter.

And as we noted in our most recent coverage of Peloton stock, puts have been all the rage of late. At the International Securities Exchange (ISE), Cboe Options Exchange (CBOE), and NASDAQ OMX PHLX (PHLX), PTON sports a 10-day put/call volume ratio of 1.45, which stands higher than 89% of readings from the past 12 months. This means puts are being picked up at a quicker-than-usual rate.

Meanwhile, now could be a good time to weigh in on the PTON’s next move with options. The security’s Schaeffer’s Volatility Scorecard (SVS) reads at a relatively high 88 out of 100, meaning the stock has exceeded option traders’ volatility expectations during the past year — a good thing for buyers.

The market tumbles — is this the crash Suze Orman warned about?