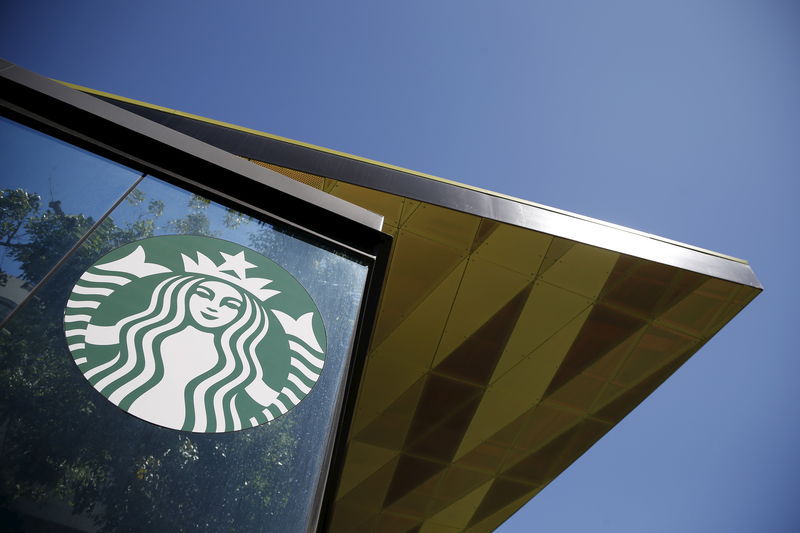 © Reuters. FILE PHOTO: A Starbucks logo is pictured on the door of the Green Apron Delivery Service at the Empire State Building in the Manhattan borough of New York, U.S. June 1, 2016. REUTERS/Carlo Allegri

BEIJING (Reuters) – Starbucks (NASDAQ:) is battling its second bout of public fury in China in less than three months, after an incident described by the U.S. coffee giant as a “misunderstanding” at one of its stores sparked criticism from online users and state media.

The company came under scrutiny on Monday after a user on Weibo (NASDAQ:) said that a number of police officers had been eating outside a Starbucks store in the southwestern city of Chongqing before they were told by staff to move away.

The user’s description of the incident quickly went viral on the Twitter-like platform, prompting the ruling Communist party’s mouthpiece People’s Daily newspaper to issue a commentary, in which it called Starbucks “arrogant”.

Chinese consumers and media have become more aggressive about protecting customer rights and monitoring the behaviour of big brands, especially from overseas.

In December, Starbucks apologised and carried out inspections and staff training across all its roughly 5,400 stores in China after a state-backed newspaper said two of its outlets used expired ingredients.

Starbucks apologized on its Weibo account late on Monday for “inappropriate communications,” saying the whole thing was a misunderstanding.

But it said staff had never chased away policemen or tried to file complaints against them.

It continued to face criticism online on Tuesday, with a few small companies announcing on Douyin, the Chinese equivalent of TikTok, that they would “boycott” Starbucks by forbidding employees from arranging meetings in or buying drinks from the shops of the coffee chain.

However, Hu Xijin, a prolific commentator in China who is the former editor-in-chief of the Global Times newspaper, urged his Weibo users to see the Starbucks Chongqing incident as an accident and not more, adding that Starbucks’s status as a foreign brand should not subject it to more criticism.

“China is a country that is open to the world,” he said. “To label a mistake as arrogance is not conducive to the bigger environment of opening-up.”