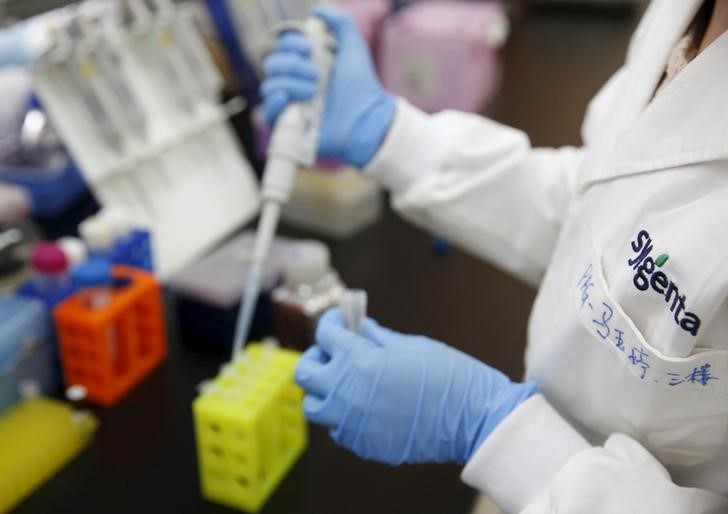 ZURICH (Reuters) -Syngenta Group, the Swiss agrochemicals company which aims to raise $10 billion from an initial public offering later this year, increased its second quarter sales by 28%, the Chinese-owned company said on Thursday.

Sales rose 28% to $7.4 billion during the three months to June 30, helped by farmers restocking their inventories of seeds and pesticides after reducing their spending last year as well as booming demand in China.

“We are focused on developing and launching products and services that enable farmers to grow good crops despite drought, heat, flooding, and high wind or other weather extremes,” said Chief Executive Erik Fyrwald.

“Our results demonstrate that we are meeting the needs of local growers not only with our sustainable products, but also with our digitally enabled services.”

Among Syngenta’s products is a spray to coat grapes and protect them against cold weather snaps, while in China the company has used satellite images to identify where the worst flood damage occurred and then send in targeted drones to spray fungicides.

Sales in China increased by 46% as Syngenta added more Modern Agricultural Platform (MAP) centres, which sell products and provide training, by 87 to 413.

Syngenta, which was bought by state-owned ChemChina for $43 billion in 2017, did not give further details on its planned IPO, which is set to be the biggest flotation in the world this year.

The parent company posted its prospectus on Shanghai’s Nasdaq-style STAR market in June, with the intention of floating by the end of 2021. The flotation will value Syngenta Group at around $60 billion including debt, or $50 billion without debt.

Asian shares soar on hopes for low charges, oil up on cyber assault By Reuters