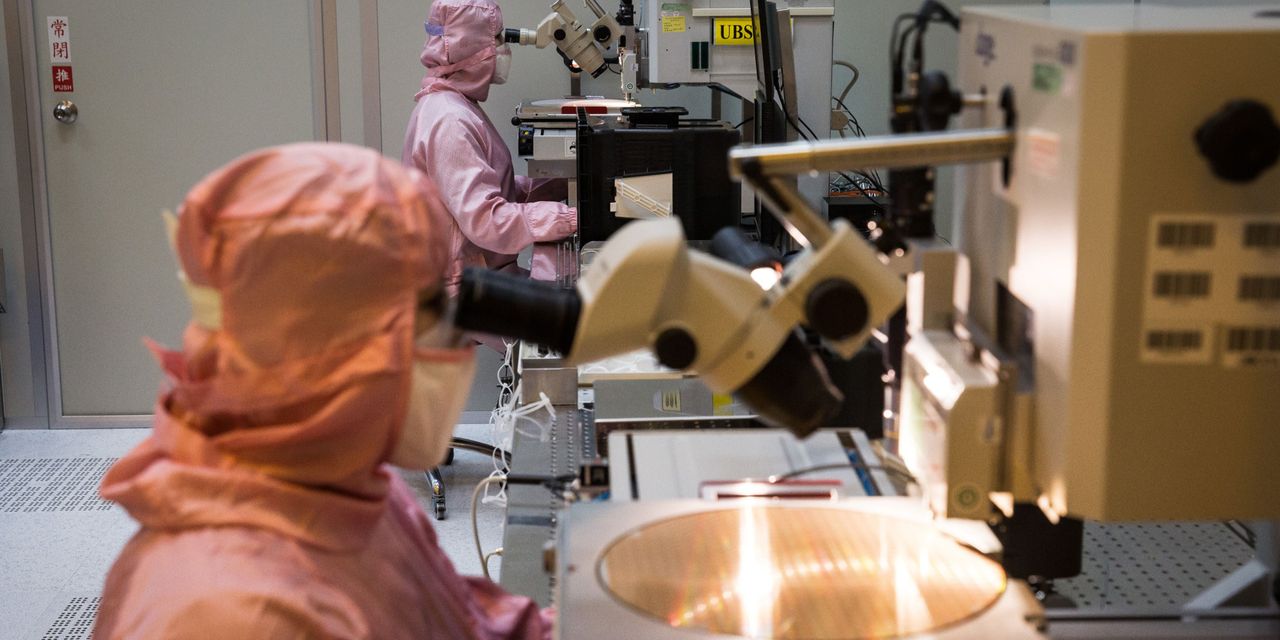 This commentary was issued recently by money managers, research firms, and market newsletter writers and has been edited by Barron’s.

THINK Economic and Financial Analysis
ING
July 30: Taiwan’s economy depends on semiconductor chip production. Chip shortages mean that cheaper electronics are selling out and Taiwan factories have been replenishing stocks with more expensive chips. And when it comes to chips, it’s all about the size of the wafer, which is essential in the production of integrated circuits.

Direct sales of 12-inch foundry wafers dominated all electronics [in the second quarter]. This is due to the shortage of eight-inch wafers. The bigger the size of wafer, the more expensive it is. And there have been almost no stocks of the eight-inch wafer. This has pushed users around the world to advance their electronic products.

This has led to a higher export value of semiconductors, and therefore a better GDP contribution from the Taiwanese manufacturing sector, even as it faced difficulties from Covid, water shortages, and blackouts.

Market Commentary
Cresset
July 28: Taking on illiquidity risk—being willing to hold income investments through maturity—remains one of the best ways to capture incremental yield in today’s marketplace. Private credit comprises direct loans to companies and individuals through private transactions. Unlike publicly traded bonds, direct loans generally can’t be redeemed prior to maturity, although maturities are usually within five years. Direct lending programs are among the most common private credit strategies, although other credit strategies include litigation finance, royalty finance, and life-insurance settlements. Like their high-yield counterparts, private credit spreads have narrowed recently, although private yield spreads remain compelling. The diverse nature of private credit offers investors yields from a variety of sources that don’t ebb and flow with credit conditions. For example, music royalties pay holders every time a song in the portfolio is played. While songs like White Christmas may be seasonal, it probably won’t be played any less during a recession.

Ahead of the Herd Newsletter
Ahead of the Herd
July 27: Curiously, copper is often overlooked when tallying up the metals required for the transition to clean energy and electrification. There is no shift from fossil fuels to green energy without copper, which has no substitutes for its uses in electric vehicles, wind and solar energy, and 5G.

Copper’s widespread use in construction wiring and piping, and electrical transmission lines, makes it a key metal for civil infrastructure renewal.

The continued move toward electric vehicles is a huge copper driver. In EVs, copper is a major component, used in the electric motor, batteries, inverters, and wiring, and in charging stations.

The latest use for copper is in renewable energy, particularly in photovoltaic cells used for solar power and wind turbines. The base metal is also a key component of the global 5G buildout. Even though 5G is wireless, its deployment involves a lot more fiber and copper cable to connect equipment.

The big question is, will there be enough copper for future electrification needs, globally? And remember, in addition to electrification, copper will still be required for all the standard uses, including copper wiring used in construction and telecommunications, copper piping, and copper needed for the core components of airplanes, trains, cars, trucks, and boats.

The short answer is no, not without a massive acceleration of copper production worldwide.

Mid-Year Letter for 2021
GMO
July 23: Despite the relative underperformance of growth year-to-date, growth stocks were still up in absolute terms, further stretching valuations, and signs of speculative mania only increased throughout the first half of 2021. It is true that some of the frothiest names lost some of their froth during this time frame (

[ticker: TSLA] price, for example, peaked in early January at over $900 per share and ended June at around $680, a loss of a quarter of its value).

Yet SPAC [special-purpose acquisition company] issuance is setting records, as is stock issuance more broadly, an indication that companies are jumping at the chance to sell more of their stock at nosebleed valuations to an all-too-eager audience. Single-stock call options, referred to internally at GMO as lottery tickets, are seeing the highest volumes in recorded history, with the only comparable time period being at the height of the tech bubble of the late 1990s. The list of scary anecdotes is long and growing—Bitcoin, meme stocks, NFTs, bidding wars at art auction houses on literal “nothingness,” and on and on.

Beyond these nervous-laughter-inducing anecdotes are a litany of more traditional valuation metrics, all of which are pointing to seriously overpriced markets, particularly in growth and the U.S. Combined, truly expensive markets plus evidence of manic behavior form the makings of a bubble.

The Lancz Letter
LanczGlobal
July 22: Over the years, we have discovered opportunities that had all the parts and just needed a catalyst for investors to realize the real potential in a company. This catalyst would be in the form of mergers and acquisitions (Alexion was recently acquired by

[AZN]), change in management (core position Microsoft [MSFT] demonstrated this with Nadella replacing Ballmer), or internally generated with new governance or processes to protect shareholder capital toward maximizing both growth and profitability.

We do not know the path that

(TPC) will find, but many of the roads lead to significant gains versus current depressed valuations. Trading at approximately 40% of book value and only 6.13 times last year’s earnings, TPC has a lot of room to move. LanczGlobal seeks opportunities with three-to-four times more upside potential than downside risk, and the fundamentals qualify this stock with such favorable risk-to-reward. The company has had problems with past projects in terms of profitable completion and post-project claims. This will continue for the next year or more, which should correspond with initial activity on new infrastructure projects. The fact that TPC was founded in 1894 and is a leader in construction/engineering is an added plus. The short-term catalyst is the U.S. infrastructure bill. TPC doesn’t need the potential revenue streams from legislation to recover. Investors should buy into its recent weakness below $13 a share for a potential 50% to 100% increase over the next 12-to-18 months. Our buy limit is $15 a share, with a target price range of $20 to $26.

To be considered for this section, material, with the author’s name and address, should be sent to [email protected].

Sky-High Faang Stocks Were Never Anything But Screaming Bargains

Dow Jones Futures: Apple Inventory Vs. Microsoft Vs. Google; How To Be A Huge Inventory Market Winner

A Ford F-150 pickup truck is offered for sale at a dealership on September 6, 2018 in Chicago, Illinois. Scott…